Leslie was the son of J.V.N. Plumptre and Mary Ling. He was adopted by Henry Heigham and adopted his surname in addition to that of his father. He joined the school aged just nine years old from Shrewsbury House Preparatory School. He started initially as a day boy in Ashburnham in 1907 and then became a boarder in Grant’s. Leslie left in Easter 1913, then aged fifteen, and joined HMS Worcester. The ship was the home of the Thames Nautical Training College and cadets received training with a view to becoming seamen in the navy.

Leslie’s career took him in a different direction and he joined the Royal Military College, Sandhurst in 1917 before taking a commission as a 2nd Lieutenant in the 3rd Battalion of the Bedfordshire Regiment in September 1917. In December he was attached to the Royal Flying Corps, and he went out to the Western Front in March 1918. Eleven days after arriving, he was wounded and invalided home, but he returned to the front on 19th May. Once again, less than a fortnight after arriving he was injured in a bombing raid. He died from his wounds on 4th June 1918. 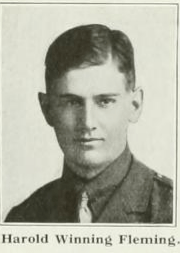 Harold Winning Fleming’s parents were Alexander (Alec) John Fleming and Lily Huthart Brown. Alec was a medical doctor in Hampstead. Lily was a daughter of Forrest Loudon Brown, of Bombay, India. In 1891, she was working as a teacher of music, and living in Altrincham, Cheshire, with her sister and widowed mother. Alec and Lily were married in September 1894 in Altrincham, Cheshire.

Harold was born in Hampstead, London, on the 25th of April 1898. He was one of four children: he had an elder brother, Alan McKinstry Fleming, and two younger sisters, Lily Woodrow Fleming and Sheila Laudon Fleming. Before arriving at Westminster, he attended St John’s House, Hampstead.

He arrived as a non-resident King’s Scholar in September 1911, and joined Homeboarders’ House. He was absent for two terms, when he went abroad on account of his health. He left the school for good in July 1915, and attended R.M.C. Sandhurst between August 1916 and May 1917.

In May 1917, he was made 2nd Lieutenant, 1st Battalion (16th Foot) The Bedfordshire Regiment. He went out to the western front May 31, 1917, served with the Expeditionary Force in France and Flanders, and was mentioned in despatches for gallant and distinguished service.

His Chaplain wrote: “I frequently saw him both in and out of the trenches, and we all liked him for his bright and happy disposition, as well as for his keenness and great efficiency. It was no secret that he was considered one of the most promising of the junior officers in the battalion.”

On 5th October 1917, Harold was killed in action at the age of 19 by a sniper at Gheluvelt, on the Ypres-Menin Road.

One of his brother officer wrote: “I am certain that at his death the 1st Bedfords lost one of the bravest of its officers.”

Another wrote: “ The other officers of his company having become casualties early in the attack (Oppy Wood, near Arras), this officer, 2nd Lieut. H.W. Fleming who was in the trenches for the first time, assumed command throughout the attack, and in the subsequent tour of duty showed coolness, gallantry and ability, and his example afforded great encouragement to his men.” 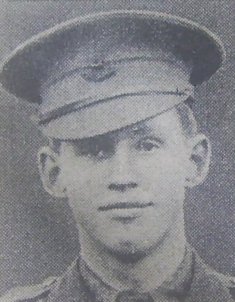 Rupert Edward Gascoyne-Cecil was in Ashburnham House from 1908 until 1913. On the outbreak of war he joined the 4th Battalion of the Bedfordshire Regiment. By May 1915 he was transferred to the 1st Battalion and went out to the Western Front, arriving on 19th. He was wounded on 28th May but had recovered sufficiently to rejoin the regiment 3 weeks later.

On the morning of July 11th 1915 the German forces exploded a mine between two trenches creating a large crater and then continued to shell heavily. On hearing the explosion Rupert tried get to the fire trench of which he was in charge, but was hit by a fragment of shell and died instantly. He was buried close to the Ypres-Cominis line, in the Brigade headquarters cemetery.

His commanding officer wrote “He was only with us a short time, but had endeared himself to all who knew him by his cheerfulness and soldierly qualities”.

Captain Curtis noted “he was always beloved by all his fellow officers, and above all his men, who had great respect for him. We shall feel the loss which the regiment has sustained by his death but we are proud, he was doing his duty so nobly when he was killed. A good many men were stunned and confused by the explosion, but 2nd Lieutenant Cecil remained cool and met his death going to his post”.

A memorial service was held at St Etheldreda’s Church, Hatfield. It was conducted by Cecils’ close friend G.K.A. Bell (OW), then chaplin to the Archbishop of Canterbury. He gave a brief address from the chancel steps:

“We have come together as a family of friends to remember one for whom they could have but a single thought, one whose life was gentle and pure, whose lovable nature drew all hearts to him, and who gave his life for his friend. He died at his post of duty in a foreign land; he was taken before he was tainted with sin. He gave his body in service of his country, but his pure soul to his Captain whom he both loved and served well”.

Rupert enjoyed bell ringing so his parents decided to use the money left on his death towards two new bells to be placed in the tower of St. Etheldreda. They were dedicated in August 1929 by his father, the Bishop of Exeter (Lord William Gascoyne Cecil).