Cecil Henry Viney was in Grant’s House 1905-1907 and left school to pursue a career as a painter. He was a student at the Royal Academy Painting Schools up until the war, but sadly none of his work survives. On the outbreak of war he obtained a commission as 2nd Lieutenant in the 3rd Battalion of the Northants Regiment. He went out to the Western front in March 1915 and was killed in action at Fromelles, France on 9th May, 1915. He was one of three Old Westminsters to die that day in the Battle of Aubers Ridge, part of a series of conflicts that took place that spring over the strategic town of Ypres.

This battle was an unmitigated disaster for the British army. No ground was won and no tactical advantage gained. 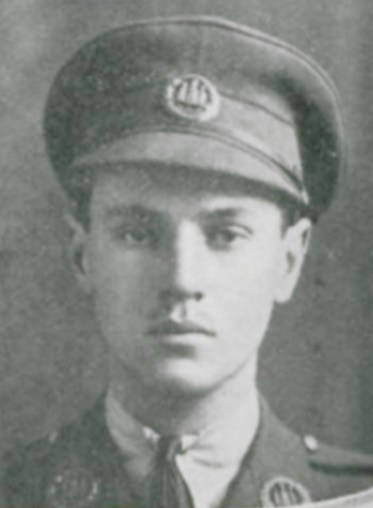 While he was at Westminster School between 1908 and 1912, Ralph Davison was a keen swimmer, cricketer and footballer. He also took part in the school’s Officers Training Corps, where he was Cadet Lance-Corporal.

After leaving school, he entered an engineer’s office, but in January 1914 he joined the Northamptonshire Regiment. He was attached to the 1st Battalion and went out to the western front in August 1914.

He fought and was wounded at the first battle of Ypres in Nov. 1914. He recovered, however, returned to the front line and was promoted from Second Lieutenant to Lieutenant on the 22nd of March 1915. He was killed in the disastrous attempt to take Aubers Ridge during the combined Anglo-French offensive in the Second Battle of Artois. His younger brother, who had followed him into Rigaud’s house, was still at the school at the time of his death.

Ralph Davison was remembered in the June edition The Elizabethan:

We are sure that the whole House tenders its most sincere sympathies to Davison, on the death of his brother R. Davison (Old Rigaudite) who was killed in action on Sunday, May 9. We must also congratulate Davison on being made a School Monitor. A brother Officer wrote: – ‘He was killed gallantly leading his mean in the attack on the German trenches. Out here he always behaved with the greatest pluck. I remember him especially in Ypres in November, when we were so hard pressed.’