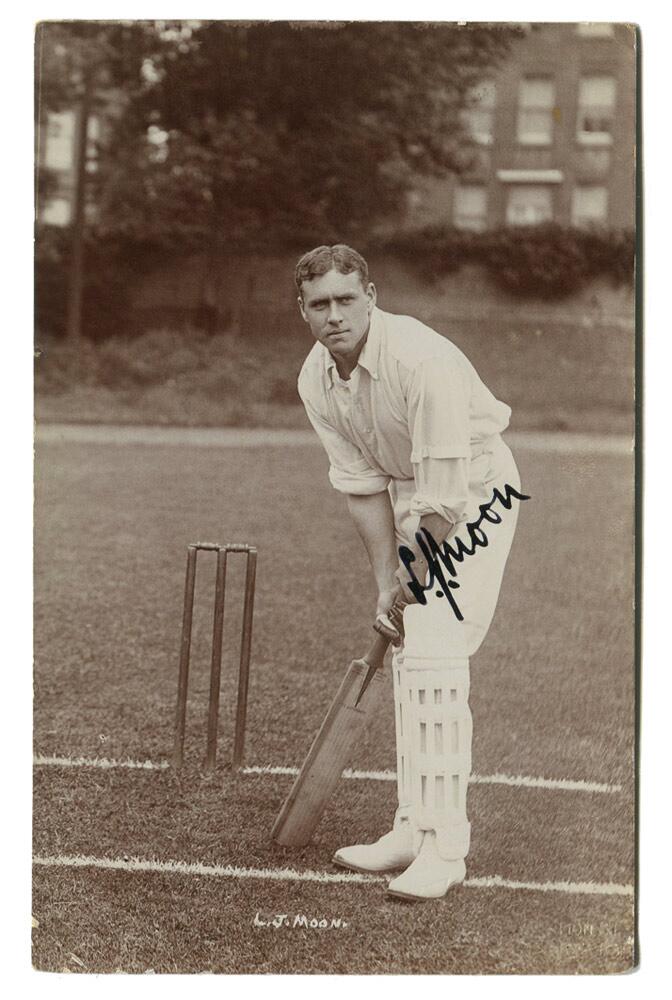 Leonard James Moon was at Westminster School, up Grants, from 1891 until 1896. He was the youngest of three brothers who were all exceptional athletes. Leonard was in both 1st XIs and continued to play association football whilst at Pembroke College, Cambridge and cricket of Middlesex in 1899 and 1901. In 1905 he played cricket for the national side against South Africa.

In the autumn of 1905 he was second in the averages for the M.C.C.’s team in America with 33.00, and before the next season opened toured South Africa with another M.C.C. side. During the latter tour he made 826 runs with an average of 27.33. He was a vigorous batsman who could cut well, and a useful wicket-keeper. At association football he gained high honours, obtaining his blue for Cambridge and playing for the Corinthians.

After university Leonard went into teaching and became Head Master of Wellesley House School, Broadstairs, Kent. After the outbreak of war, he enlisted in the Inns of Court Officer Training Corps, taking a commission as 2nd Lieutenant in the 10th Battalion of the Devon Regiment in February 1915. He served in France but lost his life in near Salonica in Greece.

Leonard was recorded in the school’s roll of honour as having died from wounds, but records found in The National Archives reveal that he actually committed suicide. Letters he left just before he died suggest that he was concerned about a rumour which had been spread about him and feared it would bring his regiment into disrepute. Leonard seems to have been suffering from paranoia as a result of what would now be identified as post-traumatic stress. A subsequent investigation found that his concerns were groundless. 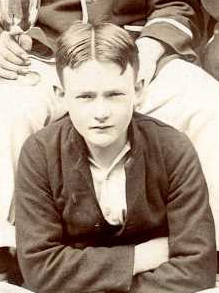 Robert Dodds was the only son of a Surrey solicitor and was admitted into Ashburnham in September 1906.During his first year at the school he achieved success in the school concert, where he “shone asÔÇª soprano”. He took part in Ashburnham’s entry for the Inter-House Glee singing competition, although they did not win. They performed the set piece The Haven by Barnby as well as the other competitors but their voluntary — Elgar’s The Sea Hath its Pearls — was “too ambitious”.

After leaving the school at Easter 1911, he became a clerk to a firm of brokers on the London Stock Exchange. On the outbreak of war, he joined the Inns of Court OTC, where he was trained in preparation for his deployment to the front line, along with fellow-OW Winfield J. Bonser. On the 19th September 1914, he became 2nd Lieutenant 13th (Service) Battalion, Northumberland Fusiliers. Just over four months later, he was promoted to Lieutenant. On 9th September 1915, he was sent out to the western front with his battalion as senior subaltern, a role which probably included duties such as acting as a representative of the subalterns to the Commanding Officer and advising a younger officer on conduct and appearance.

Robert’s battalion fought in the Battle of Loos, the first battle in which the Allies employed chlorine gas as a weapon. On the 25th of September, the British took Hill 70 under cover of smoke-screens, but it was retaken later in the day due to a delay in reinforcements and supply of munitions. The following day, German reinforcements arrived in large numbers. So when the British attacked again, thousands of infantry men were mown down by machine guns.

Robert Dodds was one of six former pupils who were killed in the first two days of the Battle of Loos.

On the Western Front Association website, you can read an eyewitness account of the Battle of Loos as it was experienced by a 19-year-old Lewis gunner.