Charles Albert Madge was the youngest son of Dr Henry Madge Madge of St. Marylebone, by Margaret, daughter of David Broun, of Broxburn Lodge. He was born on 26th August 1874 and was a member of Home Boarders house between 1887 and 1889. He was a good runner, coming 2nd in the Under 14 300 Yards race at Athletic Sports. He was also musical, although criticised as seeming ‘too often to be singing sharp’ although his reviewer noted that this was ‘very much less of a fault than singing flat, and will vanish completely as his confidence grows’. 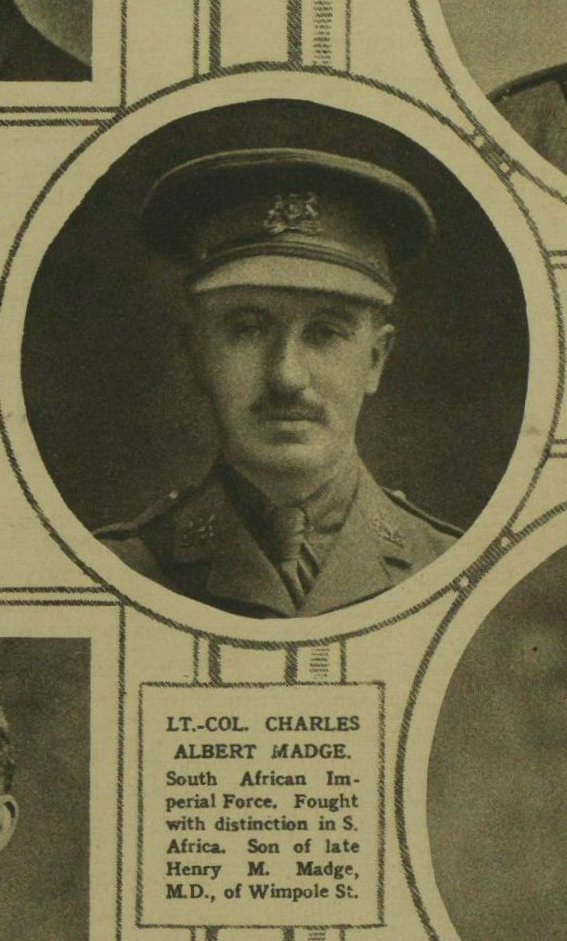 He served in the Army during the 2nd Boer War, rising to the rank of Captain in 1901 and being mentioned in despatched on 29th July 1902. He retired from the Army in 1905 but must have settled in South Africa when he married in 1910 — a son was born in Johannesburg in 1912. He was a member of the Headquarters Staff of the Union Defence Force in the country. Jan Smuts, the 2nd Prime Minister of South Africa wrote of his work:

“as Director of the Information Bureau at Defence Headquarters, Colonel Madge has done exceedingly good work, which is none the less meritorious because it has been of a somewhat dull and prosaic nature. It has, however, meant the constant exercise of no small organising ability and sound judgement. The fact that we hear so very little of and nothing against this most important branch of Defence Headquarters in itself speaks volumes for the good work Madge has done.”

He appears to have transferred to fight on the Western Front with other South African Forces later in the war. On 10th May, 1916 he was killed by a minenwerfer while being conducted round the trenches at the Hohenzollern Redoubt by Colonel Rowley who had a miraculous escape from injury.

His son, Charles Henry Madge, became a poet and sociologist and helped develop the ‘Mass-Observation’ project which aimed to record everyday life in Britain through a panel of around 500 untrained volunteer observers who either maintained diaries or replied to open-ended questionnaires.

Nicholas was the youngest son of Sir Edmund Lechmere who was MP for Worcestershire. He arrived at the school up Ashburnham in May 1895 and studied modern languages and science, rather than Classics. He left in Election 1897 and four years later he enrolled at RMC Sandhurst.

On the 23rd June 1904, Nicholas married Mary Katherine Pegg of Basingstoke, who was the only daughter of Major John Pegg, but she died after only six years of marriage. They had no children.

When war broke out, he re-joined the army as Captain of the 10th Service Battalion, Duke of Wellington’s (West Riding) Regiment and was attached to the 2nd Battalion. He was sent out to the western front in June 1915.

He was killed in action, aged 34, while attempting to capture the Hohenzollern Redoubt, near Loos