Edward Hickman Tucker Meeson was born on 20th December 1877. He was the only son of Frederick and Emily Meeson, of Eastbourne. He was admitted to the school on 24th April 1890 up Rigaud’s.

After leaving the school in 1891, Meeson began training as an engineer. In 1894 there was a note in the Elizabethan congratulating him on passing into the Royal Navy as Engineer-Student. Between 1894 and 1899, he trained at Keyham and became Engineer Lieutenant on the 1st June 1904.

On the 28th December 1908, Meeson married Gladys May Joy, the elder daughter of George Robert Gordon Joy, and they had a daughter, Margaret. By June 1912, Meeson had been promoted to Engineer Lieutenant-Commander.

In 1914, he served on HMS Laurel in the action in the Heligo┬¡land Bight on the 28thAugust, and was present at the sinking of the Bl├╝cher during the Battle of Dogger Bank in January 1915. He was also at the evacuation of both Anzac and Cape Helles. He was promoted to Commander in recognition of his services on board the Laurel, and was created a Companion of the Distinguished Service Order in 1915.

He sank with his ship, HMS Defence, at the Battle of Horn Reef, off Jutland on the 31st May 1916, at the age of 38. His widow Gladys went to Johannesburg, South Africa, where she remarried 5 years later.

Charles Walker was born in Gravesend, Kent and arrived up Rigaud’s in 1905 at the age of 16. He was a half-boarder, and managed to earn himself a tanning in Play 1907 for “ragging [fighting] in the changing room”.

He opted to focus his studies on maths and science, as opposed to the Classics, but it is unknown where he went after leaving the school at Easter 1908.

Charles was 25 when he was made a temporary Lieutenant of the newly formed 10th Service Battalion of the South Staffordshire Regiment on the 21st of November 1914. He was made an adjutant and attached to the 8th Battalion of the Manchester Regiment, which then became part of the 127th Brigade, 42nd East Lancashire Division the following May.

On the 6th of May 1915, Charles was one of the 14,224 who landed at Cape Helles, Gallipoli, where he would have seen action in the attempts to capture the heights around the village of Krithia.

The Battle of Krithia Vinyard, which took place over 6th to the 13th of August 1915. This was an attempt not only to capture ground, but also to divert attention away from Suvla Bay, where a large British landing was to be attempted.

Charles was killed in action on the second day of this battle. 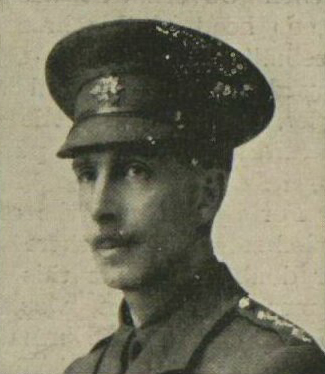