Marcel Andre Simon was a pupil at the Royal Naval College, Osborne from the age of 12. He was born in Sidcup in March 1899, the son of Dr Alfred Leon Simon, a French-born mining engineer, and his wife Kathleen Simon, the daughter of Sir Philip Fysh, a British-born Australian politician and businessman. In January 1914, he joined Westminster and was a pupil in Homeboarders house for until July. On the outbreak of war, then aged just 14, he tried to join the Naval Cadets but was rejected as he was colour blind (it was essential to be able to differentiate between the red and green lights which indicate port and starboard on ships).

Marcel lied about his age so that he could sign up with the Princess Charlotte of Wales’s (Royal Berkshire Regiment) and was commissioned as a 2nd Lieutenant on 19th December,1916. He was later attached to the 2nd Battalion Oxford and Bucks Light Infantry and went out to the western front in February 1917. Two months later he was killed during the Battle of Arras on 29th April.  The place where he fell, near Oppy Wood, was recorded but his body was never recovered. It was not until 1998 that a group out metal-detecting found his badges and pips. He was then given a burial with full military honours at Orchard Dump Cemetery in Arleux-en-Gohelle in 2000. 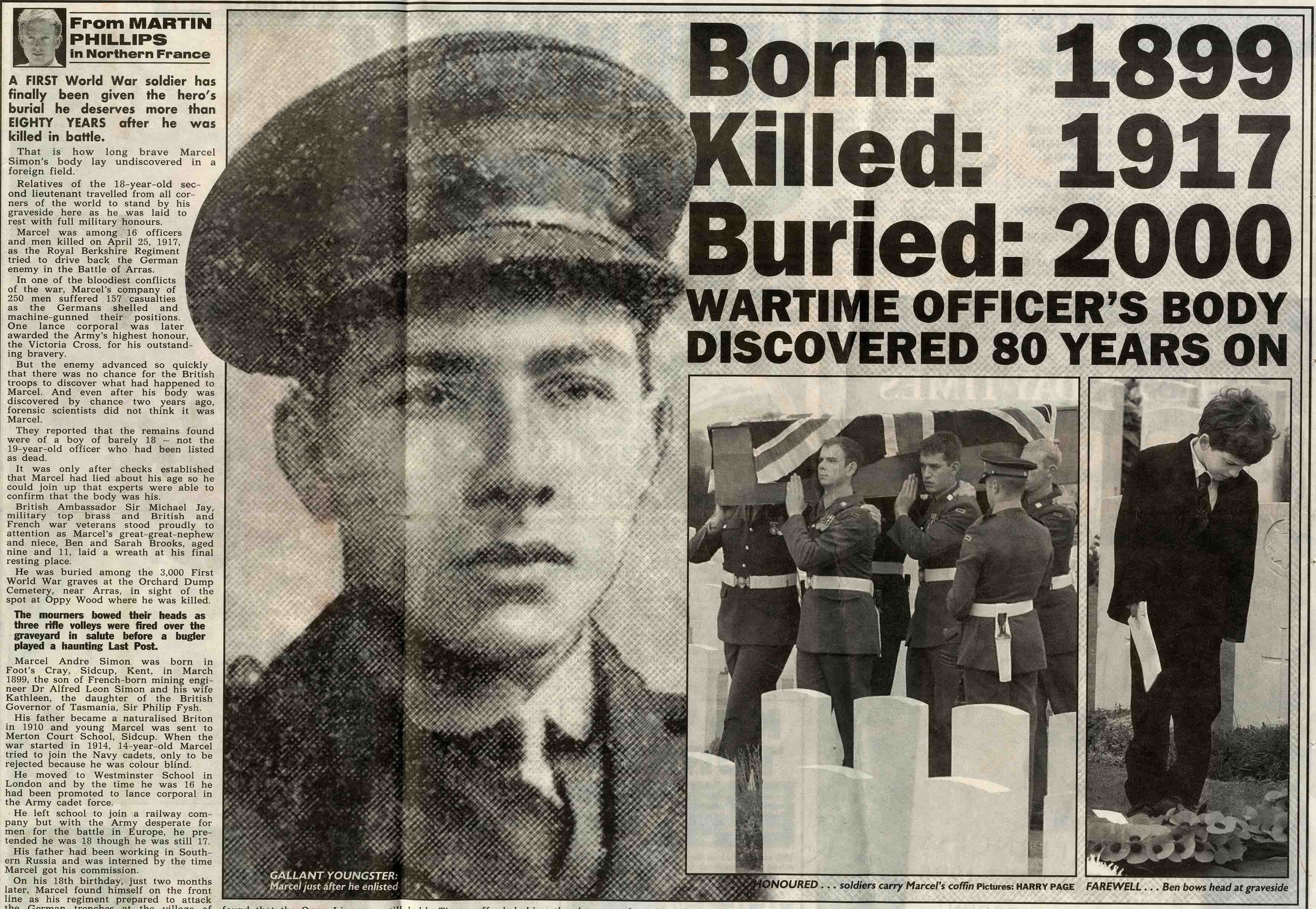 Geoffrey Hamilton Hobson was born in 1898 in Brondesbury, London.  His father was a ‘Cycles and Accessories’ manufacturer. Geoffrey joined Westminster School from Pamers School in Essex in 1911; his elder brother Eric had started in Grant’s the year before – Geoffrey was in Ashburnham.   He left in December 1913 and joined Melle College near Ghent, remaining there until the outbreak of the war.

In January 1915, aged just 17, Geoffrey enlisted in the Artists’ Rifles.  He went out to the Western Front in August 1915 and then took a commission as 2nd Lieutenant in the 1st Battalion of the Hampshire Regiment in late 1916.  His battalion was involved in the two Battles of the Scarpe, part of the larger Battle of Arras in the first half of 1917. The second Battle of the Scarpe took place between 9th and 14th April and it is likely that Geoffrey was wounded in the early stages of this battle and moved to Etaples, near Le Touquet on the north French coast for treatment, where he died in hospital on 14th April.