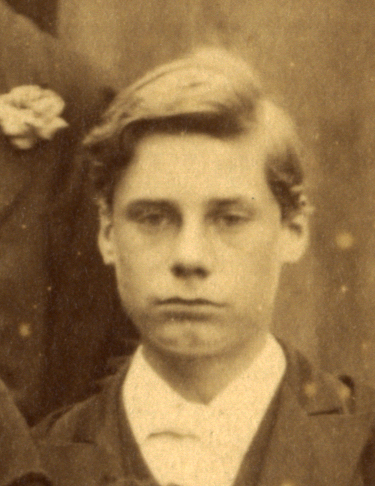 Frank Street attended Westminster School as a Queen’s Scholar from 1884-1889. Street was a talented sportsman at school and beyond. He played Association Football for Oxford, captaining the team in 1893. He also played cricket for Essex in 1897 and 1898. On leaving university he decided to be a teacher, working at Bury St. Edmunds School, Forest School and finally settling at Uppingham from 1900.

On 22nd April 1911 he married, at the age of 40, Marian Greenhill. On the outbreak of war he was faced with a difficult decision. Should he remain as a teacher and stay at Uppingham with his wife, or join up? In spite of being four years over the enlistment age, he decided it was his duty to go to war. He joined the 18th (Service) Battallion Royal Fusiliers in September 1914.

He had risen to the rank of Lieutenant when he led the men of the 9th Battalion Royal Fusiliers over the top at Mash Valley near Ovillers on the Somme on 7th July 1916. They captured two German lines but as Street was clearing woodland and trenches between them, he was shot by a sniper.

The loss of Frank Street is one that cannot be repaired. Street was the best type of man we cannot afford to lose — the unselfish Englishman.

So fine an athlete might have been allowed some conscious pride in his prowess; but love of skill, keenness for a side, were the only instincts that inspired Street. In school…boys learnt to know and admire the same examples.

Never morose, never touchy, his humour ever ready, typical English, free from ‘swank’ of any kind. These were the reasons why he was so universally popular”

He achieved excellence from a high sense of duty; and the claims of his duty he had recognised long before the outbreak of war made them dawn upon the minds of present day patriots. His failings, if such they can be called, were modesty and the lack of personal ambition…[but] for him we feel no regrets; his life was fine, and his death a brave Englishman’s.

…Before the advance, he kept his men in hand under a heavy shell fire. We know the sort of encouragement he would have given, and almost seem to hear the words…

…Never a braver soldier fell, never was mourned a dearer friend…at the school from which he flew to arms his noble name will never die.

Street’s body was never found. His name is on memorials at Thiepval, Westminster School and St Peter and St Paul’s Church, Uppingham.