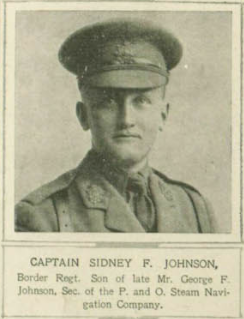 Sidney Frederick Johnson was the second son of George and Blanche Johnson. He was born on the 19th August 1887 and arrived at the school in September 1901.

He threw himself into all elements of school life, from football and cricket, to debating and chess, to the School Mission. In Play Term 1905, he was made Head of Ashburnham, alongside being Captain of the School Football XI and also Captain of House Football and Cricket. His successor wrote in the House Ledger:

“to fill so many responsible positions eodem tempore needed a fellow of many parts: many of these parts he possessed and many he did not possess. No man has done more for the House Games & he has succeeded by his own prowess and personality in establishing confidence in quite inferior players. For example he was absent on account of an exam from a large part of the HBB 1st inns in their shield match with us: but directly he came on the field, them who had been playing half-heartedly before put twice as much into their work as they had before his arrival.”

Upon leaving the school, Johnson achieved a BSc at the London University. He enlisted as a 2nd Lieutenant with the Queen Victoria’s Rifles in May 1910 before becoming a partner in Hendren’s Trust, Ltd., a financial company for promoting British enterprise in Canada.

On the outbreak of war, Johnson decided to re-join the army. But first — a fortnight before taking a position as 2nd Lieutenant, 3rd Battalion (Reserve) Border Regiment — he married Helen Marguerite, the elder daughter of Farquhar Robinson, of Montreal, Canada on 28th November 1914.

Johnson was attached to the 2nd Battalion and went out with them to the western front on 20th February 1915, but was invalided home in May 1915 as a result of wounds he received at Festubert. He was promoted to Lieutenant the following March and returned to the front on the 29th December 1916. He was appointed brigade bombing officer with the rank of temporary Captain on the 7th October 1916 and was killed in action at the age of 29 at Beaumont Hamel on the 10th January 1917.