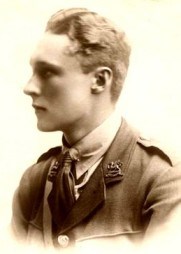 Paris was born in London in 1899 to parents Isabel Alice and Paris Frederick Drake Brockman, a barrister. He joined Rigaud’s House in 1912. We do not know much of his time at school, but after leaving he served with the Artists Rifles before training at the Royal Military College at Sandhurst. From there obtained a commission as a 2nd Lieutenant in ‘The Buffs’ – the Royal East Kent Regiment. The photograph shows him in his regimental uniform.

Paris went out to the Western Front in April 1918. He was killed in action in Flanders. The Elizabethan noted that he ‘saw considerable service, and proved a very capable officer.’