John Sheridan Gregory was born on the 15th of September 1889. He was the younger son of Lieutenant-Colonel Gregory Marcar Gregory, of West Kensington, and Edith Laura, the second daughter of John Sheridan, of Earl’s Court.

Before arriving up Ashburnham in 1902, John was educated under Mr George Egerton, Somerset Street.

While he was at the school, he represented his house at Football as a half-back. The Elizabethan notes that he “played very well” in the 1907 House Cup match in which his team won 6-0 against Rigaud’s, and was “on the top of his form” against the Homeboarders.

After he left the school in July 1907, he went on to Trinity College, Cambridge in Michaelmas 1908. He graduated with a BA and LLB in 1911, and was admitted to the Middle Temple in November 1913.

Particularly keen to become proficient in riding and driving, John enlisted in the Officer Training Corps (Army Service Branch). By August 1914, he had qualified for Certificate A, a proficiency award for basic training, and had passed all but his final examination for the Bar. 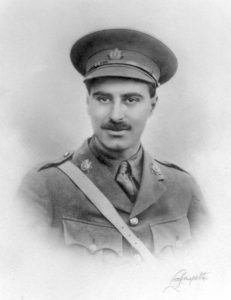 As soon as he had qualified, he went out to France as 2nd Lieutenant, Army Service Corps (Special Reserve). Then, between April 1915 and August 1917, he served as Supply Officer to the 9th Cavalry Brigade. He rose through the ranks, becoming a temporary Lieutenant in August 1915, a full Lieutenant in February 1916, and a temporary Captain in June 1916.

In August 1917, he was attached to the Royal Flying Corps, and returned to England to qualify as an Observer.

He returned to France in October 1917, and joined No. 16 Squadron R.F.C. before being transferred to No. 35 Squadron in November. He was promoted to Captain on the 29th November 1917, and was preparing to go through the training of a pilot.

He received the 1914 Star for his past services in France. But just a fortnight later, on 19th February 1918, his plane was shot down in an encounter with a German machine between Lempire and Épehy. He died aged 28, and is buried near Peronne.