Austin Woodbridge was the son of solicitor Thomas Woodbridge, and the seventh member of his immediate family to study at Westminster School. He was born 18th May 1876, and arrived at the school in 1891, joining Grant’s House. While at the school, he participated in football and cricket to a significant degree, earning his pink-and-whites in 1894. He left the school that same year.

He is recorded in the Elizabethan several times as an Old Westminster participating in sporting events, and, interestingly, as a member of the Freemasons. He became a member of the London Stock Exchange in 1900, and continued to work on the stock exchange thereafter. In 1905, he married Ethel Mary, the third daughter of George Sunday.

The next surviving records of Woodbridge emerge in military documents, allowing us to identify his military progress. Here he served as a member of the 8th Battalion Middlesex Regiment from 1912, before becoming a Major in April 1915. He held a special appointment in 1917, and was subsequently awarded the Military Cross.

At the end of the war he married his second wife, Norah Woodbridge. The fate of Mary Ethel is unknown. Austin Woodbridge continued working active service after the ceasefire, remaining in France and the Western Front. It was here that he passed away, dying of influenza on 28th February 1919.

Vivian Bristowe was one of ten children – five boys and five girls. They lived at 11 Old Burlington Street, with their father, John Syer Bristow, and mother, Miriam Isabella Bristowe (née Stearns). All five of the boys were sent to Westminster, and their father, a physician specialising in the nervous system, was also physician to the school.

Vivian was the youngest son. He was born on the 12th of June 1874, and arrived as a Homeboarder in September 1885. He represented his house in the football, and The Elizabethan includes the following account of a game that Homeboarders won 9-1: “The ground was very heavy and slippery after the recent thaw, and towards the end of the game the players were covered with mud” Saturday March 12th 1892.

There is not a lot of information about Vivian or his time at the school, but we do know how much he weighed! 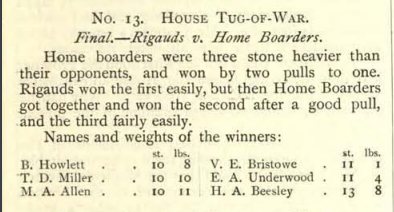 After leaving the school in July 1892, he became a stock jobber – a market maker on the London Stock Exchange, and continued playing football on the OWW team. He went out to South Africa shortly before World War I, where he worked as secretary to his eldest brother, Leonard Syer Bristowe – by then Hon. Mr Justice Bristow – in Pretoria.

He enlisted in the South African Medical Corps in November 1915, and joined the East African Expeditionary Force in January 1916. While on active service at Rug, Rufigi River, East Africa, he contracted dysentery and died on the 14th of April 1917.

His Colonel wrote of him: “he did excellent work, and never fell out in the most arduous treks imaginable… His pals miss him, and I miss a steady and trustworthy man, who was never known to shirk his duty.”

Edward Whinney was the sixth son of Frederick Whinney and Emma Morley. He was born in London on the 31st August 1870 and was admitted to the school as a Homeboarder in September 1884. During his time at the school, he was a keen cricketer. Even after he left, he continued to represent the school in the Old Westminsters XI.

After leaving school in July 1887, Edward and became a member of the London Stock Exchange. On the 7th October 1987, he married Maude Clementine Louise, who was the elder daughter of John Crow, of Hampstead.

He had already served in the army, and following the outbreak of war, he rejoined his old former regiment, becoming a Captain of the 2/7th Battalion (Territorial Force) Middlesex Regiment on the 23rd October 1914. He was promoted to Major just over a month later, and was transferred to the 12th (Service) Battalion, Middlesex Regtiment. He served with them at Gibraltar and in Egypt, before going out to the western front in June 1916.

He was killed in the action at Thiepval on the 26th Sept 1916, at the age of 46, leaving behind him his wife, three sons and a daughter.