With so many lives lost on the Western Front, it is easy to forget that those commemorated were sometimes killed in rather different circumstances. Godfrey Jackson Hunter was one of the Old Westminsters who fought to suppress the insurgency in Dublin known as the Easter Rising.

Hunter was a Home Boarder at the school from 1904 to 1907, before going on to Cambridge and the Bar. He fenced whilst he was at the school and university, reaching the semi-finals of the Public Schools competition at Aldershot in 1907. In 1914 he joined the Lincoln’s Inn Officer Training Corps before becoming a 2nd Lieutenant in the 5th Royal Irish Lancers.

On Easter Monday, 24th April 1916, the Easter Rising began in Dublin. Patrick H. Pearse declared the establishment of an independent Irish Republic shortly after noon at the General Post Office. In order to suppress the rebellion five cart loads of rifles and a large amount of ammunition brought from England needed to be transported from the North Wall railway terminus to the Magazine Fort in Phoenix Park. Fifty mounted lancers, under the command of Godfrey Jackson Hunter, were instructed to provide an escort.

As the lancers approached the Four Courts a number of Irish Volunteers opened fire. Lieutenant Hunter ordered his men to fall back and they desperately tried to move out of the line of fire. The lancers managed to take cover at the nearby Collier’s Dispensary and Medical Mission buildings. They moved the ammunition inside and turned the wagons over to form a barricade. The two groups then proceeded to fire at one another, the volunteers attacking and being repulsed on several occasions over the following days. On Wednesday 26th April, during an exchange of gun fire, Hunter was shot dead. The remaining lancers were eventually relieved the following day by soldiers using makeshift armoured vehicles created from boilers from the nearby Guinness Brewery. 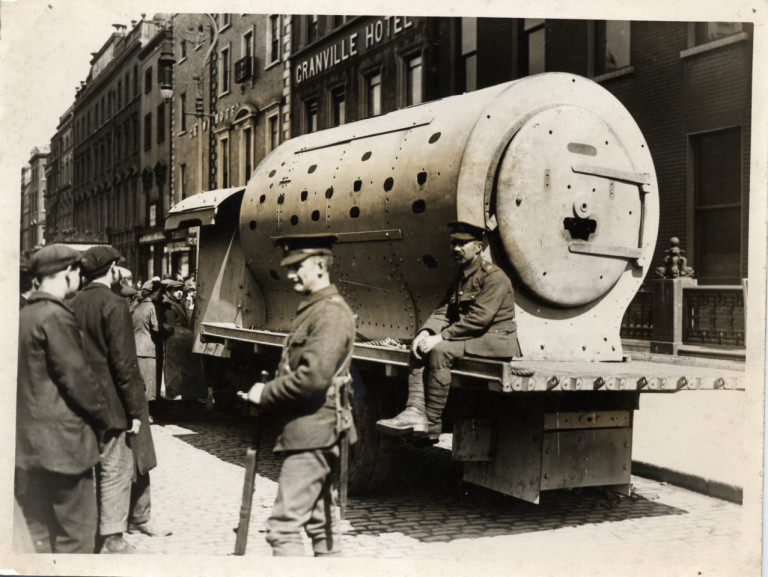