When G. C. Formilli was brought down wounded within the German lines, one of the German aviators who brought him down flew back over the British lines to drop a note from him to his C.O., enclosing a letter to his mother.

The full tale was recounted in an article in the Daily Mail, 7th September 2012:

It was on January 5, 1916, that the British single-engine biplane, crewed by pilot Lieutenant and observer Lieutenant Geoffrey Formilli, took off on a reconnaissance flight from Lille.

Boelcke sprayed the British plane, a BE2c reconnaissance aircraft, with hundreds of rounds from his machine-guns, forcing it to crash land.

The German ace wrote about what happened when he landed and approached his two enemy airmen:

‘I went straight up to the Englishmen, shook hands with them and told them I was delighted to have brought them down alive. I had a long talk with the pilot, who spoke German well. When he heard my name he said with a grin, “We all know about you!” I then saw to it that they were both taken in a car to the hospital where I visited the observer today and brought him some English papers and photos of his wrecked machine.’

Lieutenant Formilli then wrote a letter to a Captain Babington of the Royal Flying Corps that Boelcke dropped over the British lines. 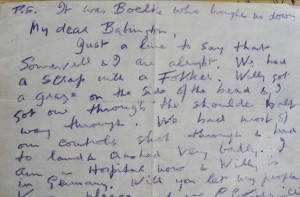 ‘Just a line to say that Somervill & I are alright. We had a scrap with a Fokker. Willy got a graze on the side of his head & I got one through the shoulder half way through. We had most of our controls shot through & had to land & crashed very badly. I am in Hospital now & Willy is in Germany. Will you let my people know please, yours G Formilli. PS. It was Boelcke who brought us down.’