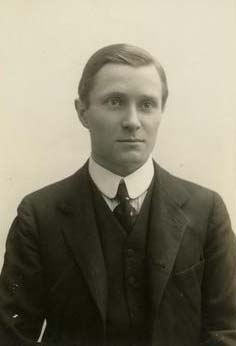 Leonard Davies Looker was the only son of William Looker, of Westminster, and Katherine, daughter of John Price Davies, of Knighton. He was born on 16th September 1888 and was admitted up Grant’s in September 1900.

In 1902, Leonard came second in the U13 120 Yards Race, and gave a good performance at the high jump. He was tanned “for messing in dormitory, not owning up and lying” and “for sending John round to Master’s when he had been fagged to go himself.” He gave a strong performance against the much older W.T.S. Sonnenschein in a game of racquets: “Looker started with a long lead in spite of all his physical disadvantages, but Sonnenschein gradually wore him down.”

He left the school in December 1906 and became a member of Lloyd’s in 1911. On the 21st September 1916 Leonard married Molly, the elder daughter of Richard John Davies, of Poynder’s Road, Clapham Park. Soon afterwards, he joined the army.

He enrolled as 2nd Lieutenant, 5th Battalion, Royal West Surrey Regiment on 19th December 1916 and went out to the western front in January 1917. He was killed in action at Klein Zillebeke, near Ypres, on 1st August 1917.

This entry was posted in The Fallen and tagged Grant's, Royal West Surrey Regiment, Third Battle of Ypres. Bookmark the permalink.