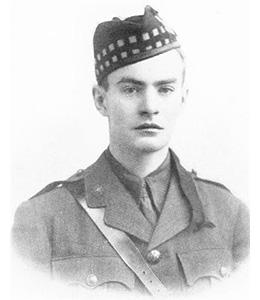 John Collinson Hobson was born on 27th August 1893. His parents were Thomas Frederick Hobson, a barrister, of Kensington, and Mary Innes, the daughter of John Borthwick Greig, of Hampstead, who was Writer to the Signet.

John’s elder brother, Frederick Greig Hobson, was up Grant’s between 1905 and 1910. John joined him at the school in September 1907, where he took part in the shooting, boxing, OTC, football and cricket teams.

At the meeting of the Debating Society on Friday 15th December 1912, John proposed the motion ‘that this House deplores the existence of a privileged social class’: “Mr. J. C. Hobson in a few faltering and somewhat incoherent periods pointed to the extremes of wealth and poverty. In every civilised country the wealthy classes were not only idle and luxurious but effete and barriers to all progress. He concluded a sentimental speech by a fervent appeal to the members of the Society ‘to slay the drones of the community, to push the demon of Wealth over the precipice back to the infernal abode from whence it came.’” The motion was lost by 7 votes to 13.

He was head of Grant’s over the uneventful year of 1911-12. In the house ledger, he summed up his first term as follows: “nothing of importance occurred this term. There does not seem to be much talent either for work or games in the house. But many of the younger people are promising. At least it appears there will be no big rows this year.” And his second term “was distinguished by the absence of influenza or any similar epidemic” and by the fact that “there were no rows of any quality”.

He was elected to Christ Church, Oxford in July 1912, and he matriculated in Michaelmas to study History.

He enlisted as a 2nd Lieutenant with the 12th (Service) Battalion, the Royal Scots (Lothian Regiment) on the 12th September 1914. After having been promoted to Lieutenant in February 1915, he went out to the western front in April 1915. He was attached to Machine Gun Corps, 116th Company in July 1916.

John was killed in action during the Third Battle of Ypres, on 31st July 1917, near St. Julien. His commanding officer later explained that John had been “selecting a position for his guns – deep in the German lines – when he was killed instantaneously by a German shell”.